The winner of Best Chef: Southwest at the prestigious 2017 James Beard Foundation Awards started with very humble beginnings. Hugo was raised in Mexico City and Puebla, Mexico, and learned his love of cooking from his mother and grandmother, a revered mole maker. At age 17, he left Mexico for Houston and began his career in the restaurant industry as a dishwasher and busboy at Backstreet Cafe before graduating from culinary school and later becoming its executive chef and owner, along with wife Tracy Vaught.

His American Dream continued when they opened Hugo’s in 2002, featuring regional Mexican cuisine; Caracol, a Mexican coastal kitchen, in Houston’s Galleria area in 2013; and Xochi, celebrating the flavors of Oaxaca, in early 2017 in the Marriott Marquis Houston Downtown. Hugo has published two cookbooks: Hugo Ortega’s Street Food of Mexico (2012) and Backstreet Kitchen: Seasonal Recipes from Our Neighborhood Cafe (2013). Tracy and Hugo are also investors in Origen restaurant in Oaxaca, Mexico and with their team created the menu for Hugo’s Cocina in Terminal C at George Bush Intercontinental Airport in Houston. In 2017, Hugo was approached by celebrity chef Michael Mina to do a “pop-up” concept at his Mina Test Kitchen in San Francisco, and Mi Almita was born. The concept is currently open in Honolulu and a mainland location is in consideration.

He was a James Beard Award finalist for six consecutive years, 2012-2017, before becoming the first Mexican-born chef to win the award. June 20, 2017 was declared Hugo Ortega Day in Houston by Mayor Sylvester Turner in honor of his James Beard Award. Hugo was bestowed the 2017 Craig Claiborne Lifetime Achievement Award from Southern Foodways Alliance. Hugo is one of Houston’s most acclaimed chefs and believes that a chef is only as good as the last meal he cooked.

He remains a fixture in his four restaurant kitchens, is an avid bicyclist, and enjoys spending time at the beach with his family. 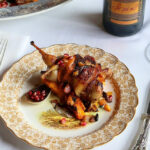 Have you met Cruz? He’s one of our resident graz

We wouldn’t have it any other way! #weloveourd

Our Estate in Rutherford is home to the oldest cer

It’s that time of year, our holiday sets are her

It’s been two weeks since we cruised around the

We need your vote! Please join us in voting for o

We look forward to having you visit! #visitnapav

This weekends fall #winetasting lineup in the oliv

From pomace to dirt. #composting is an incredible

What a night! We celebrated our 23rd harvest last

We spent some time yesterday getting our PERSPECTI

Join us October 15th!!! Link in bio for tickets.

Last week we were honored to receive the San Franc

Our estate on Napa Valley's Rutherford Bench is th

You must be of legal drinking age to enter.
Please confirm that you are 21 years old or older.